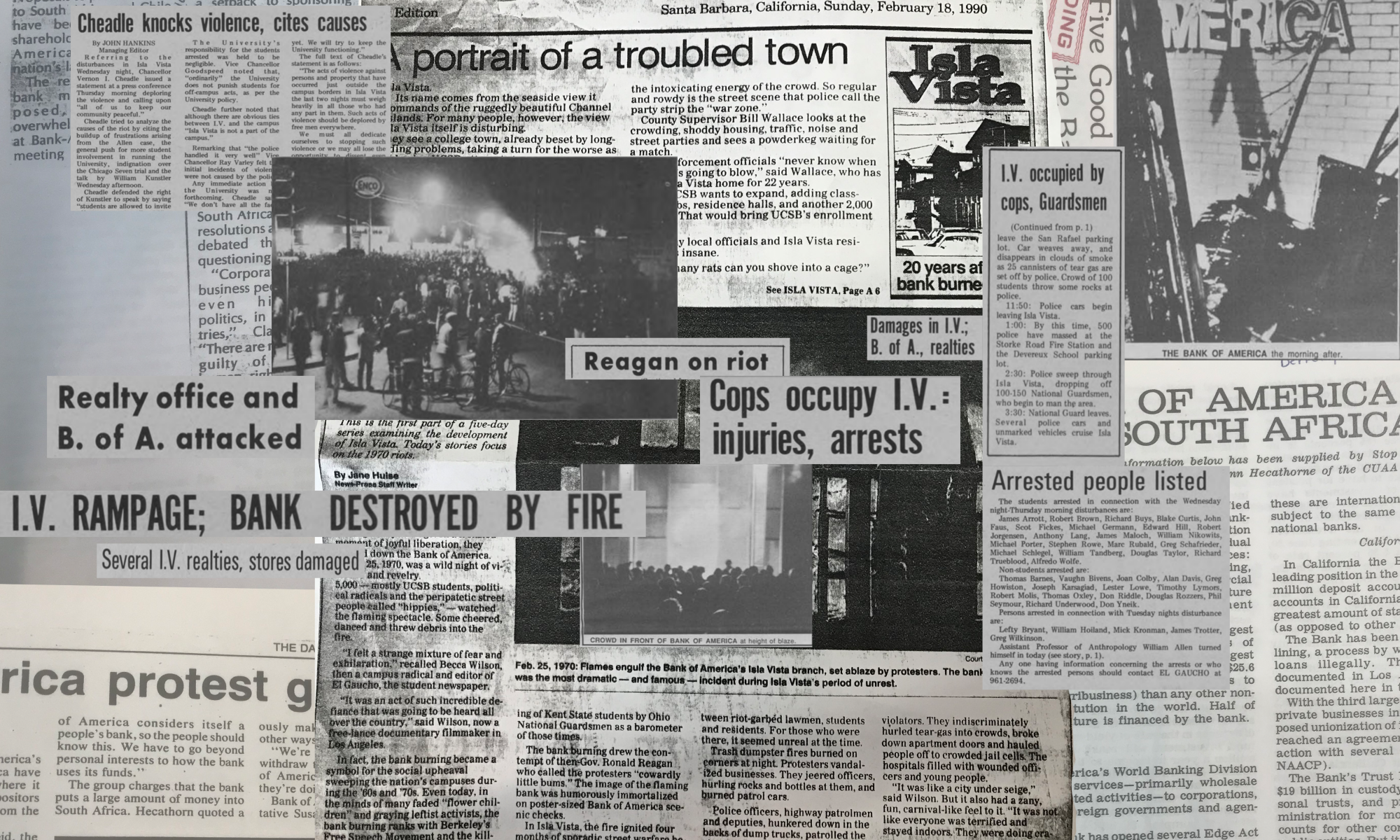 The IV Bank of America Burning was an intense, historical moment of student activism and social justice at UCSB.  It began as a peaceful protest at Perfect Park and spiraled into a community-wide retaliation against all symbols of corrupt justice.  Students sought to fight bigger powers at play such as Bank of America, and clashed with Isla Vista police during the chaotic events that occurred on February 27th, 1970.

This historic night originated with protests and boycotts of Bank of America, sparked by the students at UCSB.  BOFA had been giving illegal loans to South African countries and indirectly supporting apartheid against government regulations, amongst other unsavory endeavors.  It illegally funneled money to the Pretoria Regime, which consisted of mostly white men in South Africa enforcing discriminatory apartheid rules towards the black population.   By funding their military and economic endeavors, Bank of America was supporting the perpetuation of a deadly racist society in order to gain access to mineral resources in South Africa.  Corporations like these have monetized human suffering for years, and the students in Isla Vista no longer tolerated the blind acceptance of Bank of America’s human rights violations. Supporting apartheid was only one of the numerous reasons why students were against Bank of America; the rest are outlined in archived pamphlets, flyers, and informational documents created for students by students to shed light on the power we hold as consumers to invest in businesses that are economically and socially held accountable for their actions. 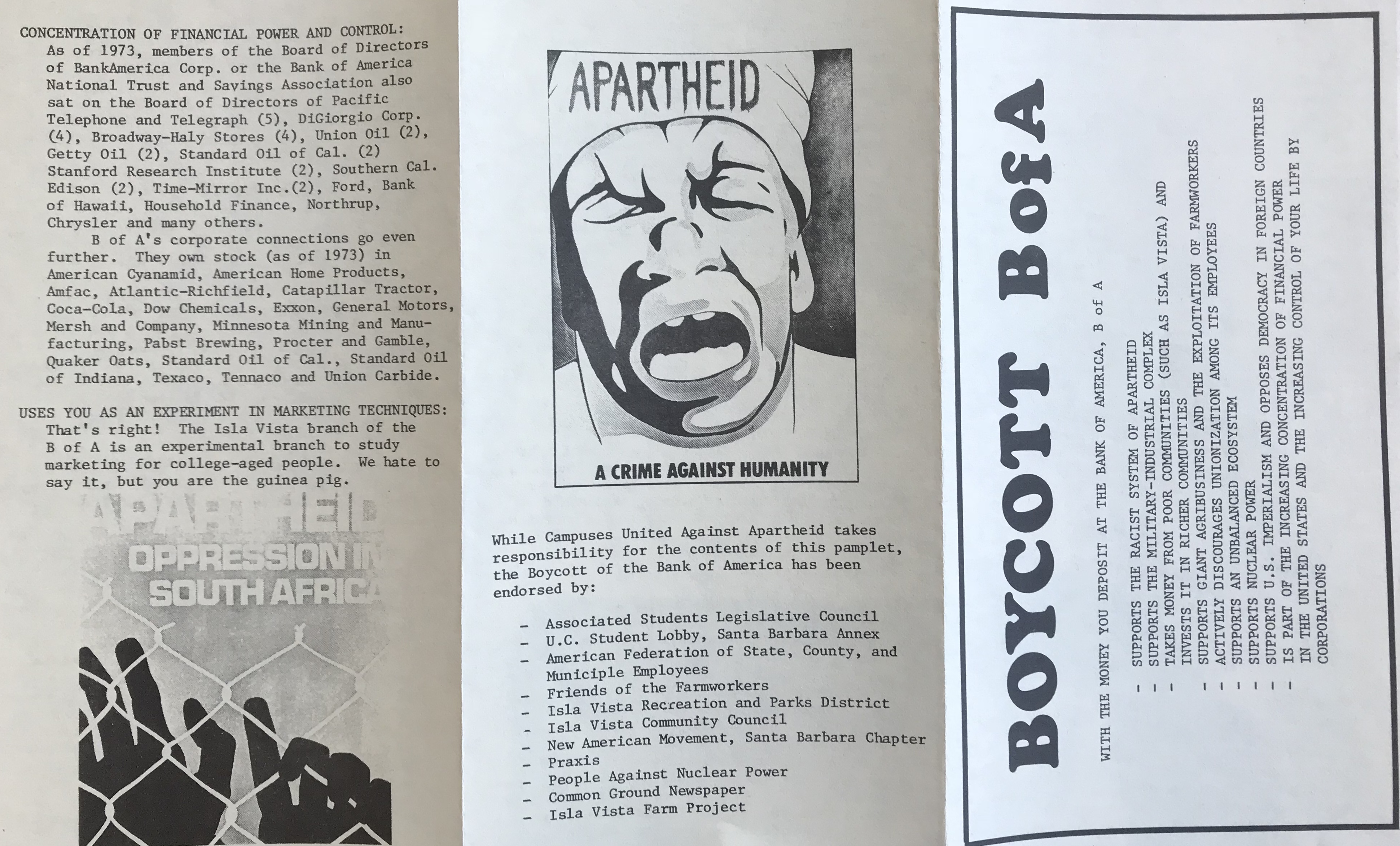 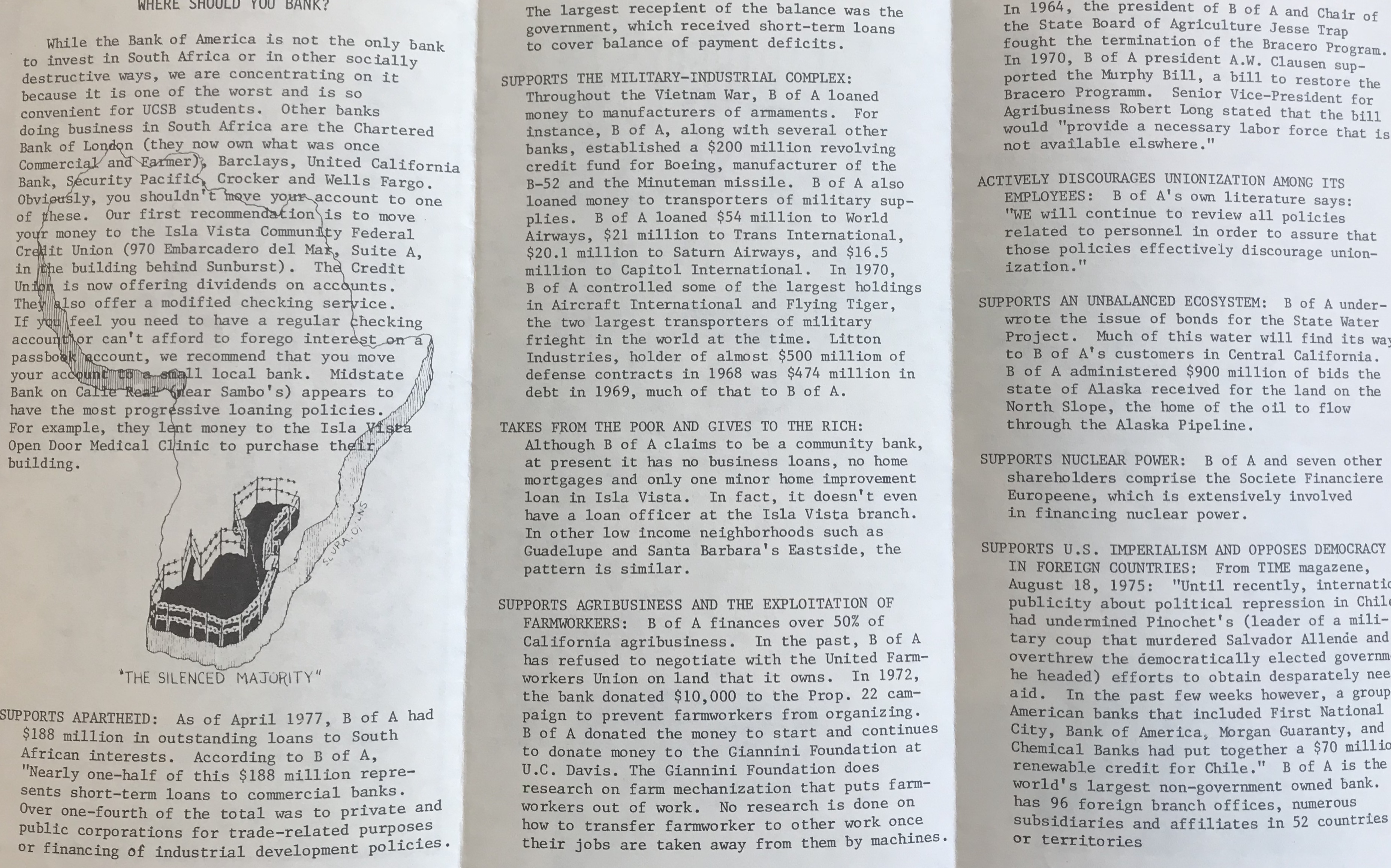 Despite numerous protests, pamphlets, and speeches, people continued to use Bank of America and Bank of America continued to support apartheid, amongst other unsavory endeavors.  And though these students were inspiring change, it wasn’t at the national scale it needed to be to execute a long-lasting, effective boycott by consumers.  This frustration in addition to already tense relations with police officers caused students to attack any symbol of “lawful institution” that tried to control them.

Documented here is a timeline of events that occurred in Isla Vista during the several days that the Bank of American Burning took place: 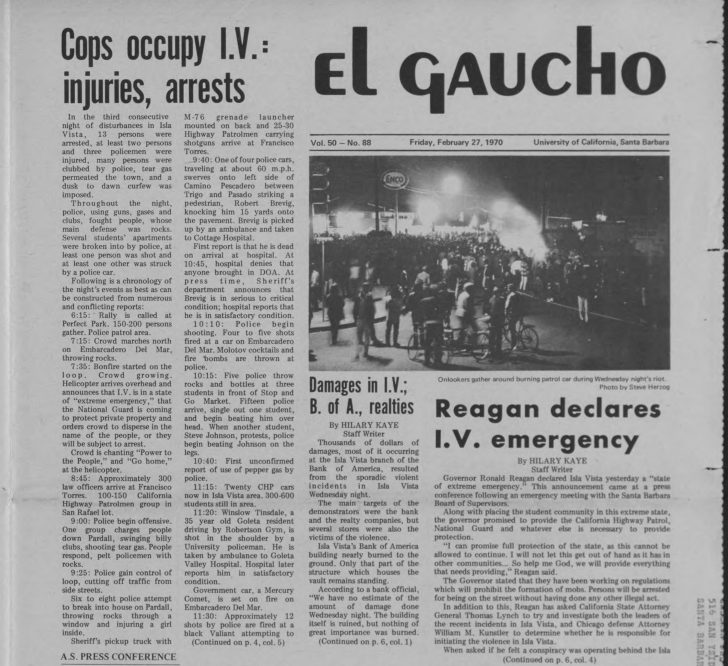 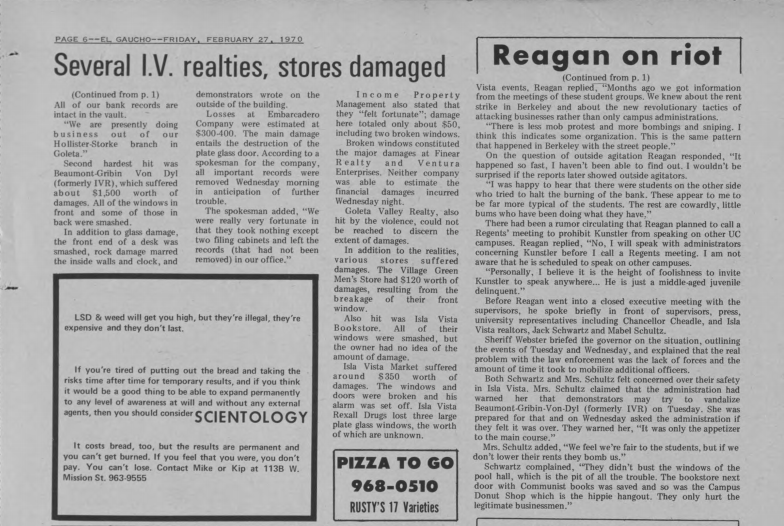 Student responses to this violent protest were also documented during a Letter To The Editor publication about the Isla Vista Bank Burning.  They shared their opinion on the violence that took hold overnight, and the students’ struggle for worldwide justice versus their struggle for local peace. 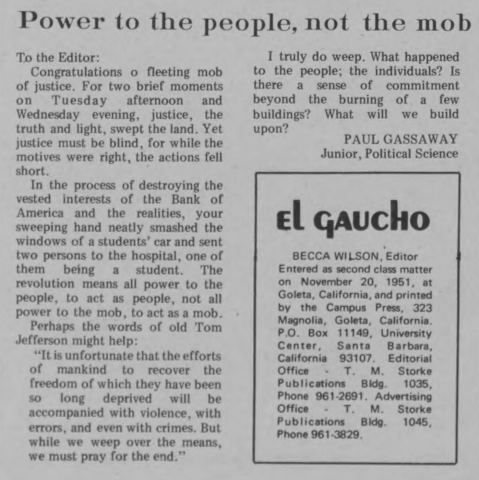 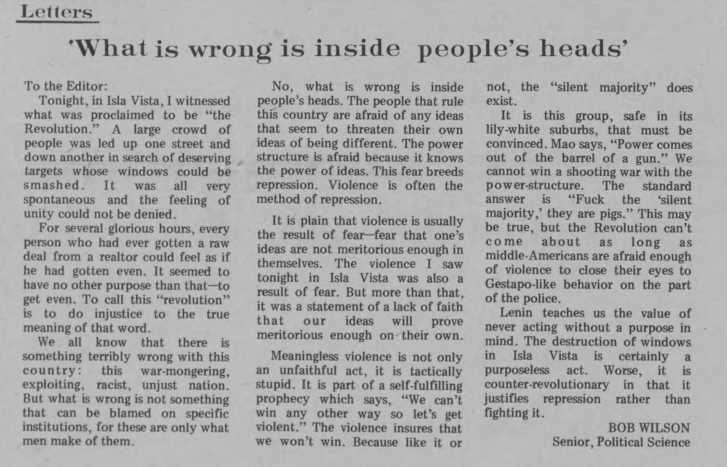 During the 25 year anniversary of the Bank of America Burning, the Daily Nexus recovered more personal accounts of the night from faculty, students, and local residents that were in the area during the riots: 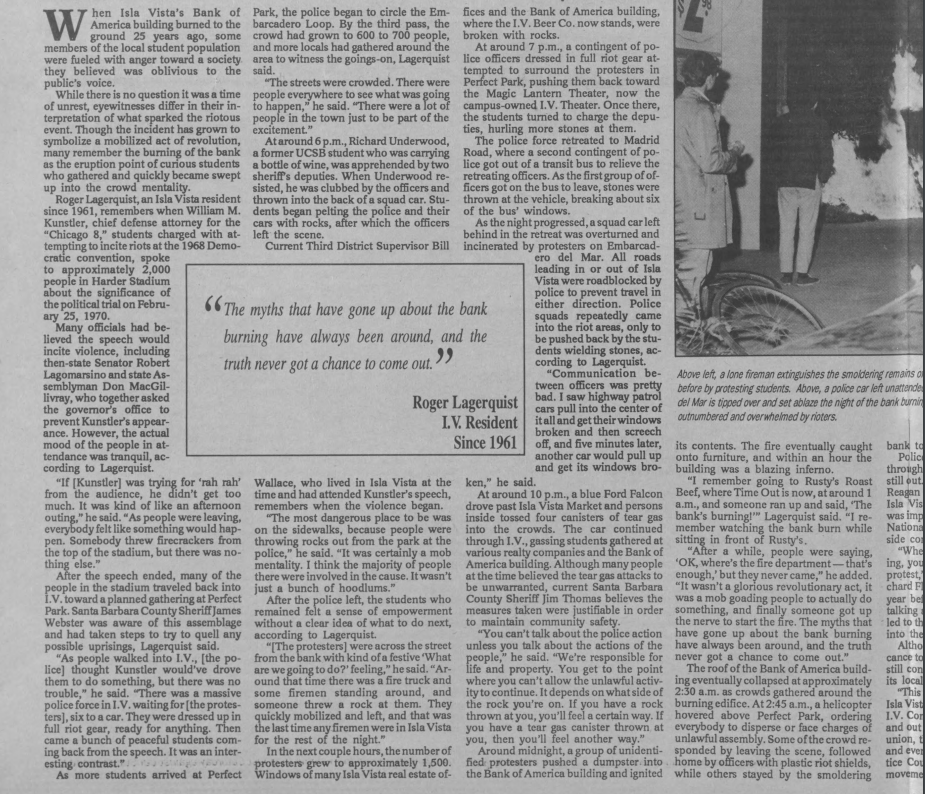 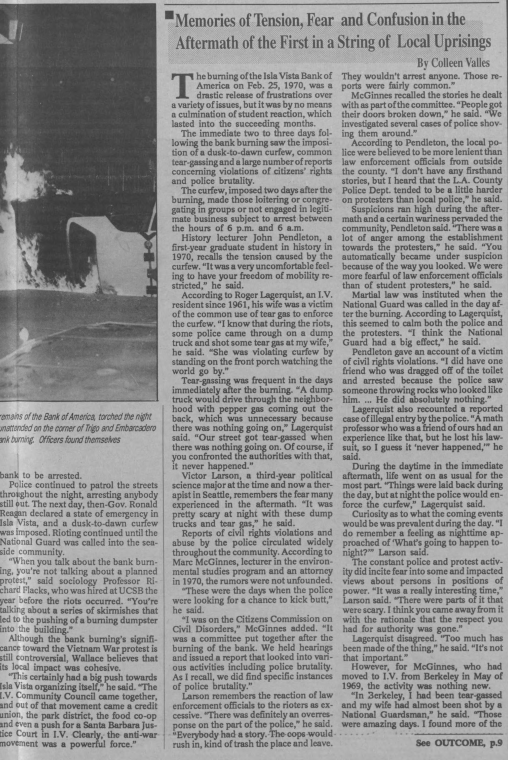 Robertson, Nick. (1995, February).  Witnesses recall the day that caused a ‘State of Emergency’ Declaration in Isla Vista, Retrieved from https://www.alexandria.ucsb.edu/downloads/3b591979r

This account clarified many misconceptions about the catalyst of the Bank Burning.  William Kuntsler, the chief defense attorney in the “Chicago 8” case, gave a speech at Harder Stadium that people believed would incite a riot.  Cops gathered in Perfect Park, awaiting a massive disturbance, when the students were simply participating in a peaceful union in the park.  “‘They were dressed up in full riot gear, ready for anything. Then came a bunch of peaceful students coming back from the speech. It was an interesting contrast’” (6).  This account of the burning pinpoints Richard Underwood’s violent apprehension as the spark that set off what would be known as one of the most violent instances of chaos, confusion, and destruction in IV history.

There are more details about the night presented in this special anniversary spread, as well as  snippets of resident testimonies and personal recollections of the events that occurred: 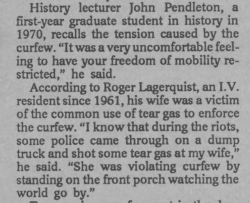 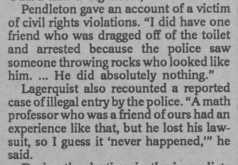 ROBERTSON, NICK. (1995, FEBRUARY).  WITNESSES RECALL THE DAY THAT CAUSED A ‘STATE OF EMERGENCY’ DECLARATION IN ISLA VISTA, RETRIEVED FROM HTTPS://WWW.ALEXANDRIA.UCSB.EDU/DOWNLOADS/3B591979R

The testimonies surrounding the Isla Vista Bank Burning portray a closer look into the resident mentality during this state of mass destruction and violent chaos.  The events that spiraled out between students and police officers originated with Bank of America’s devotion to profit from human suffering. Students in IV protested such gross mistreatment through gatherings, marches, and informational flyers.  The goal of the Perfect Park protest wasn’t to destroy the city they live in; the people simply wanted their voices heard and concerns acted upon. They wanted some semblance of control on their side and to make a change on behalf of those who couldn’t speak for themselves.  This doesn’t excuse the violence that erupted out of this movement, nor does it attack the actions of the police officers attempting to quell this event. It merely emphasizes the deep-seated rift between those who seek to enact and those who enforce justice in Isla Vista.

One Reply to “Bank of America Burning”