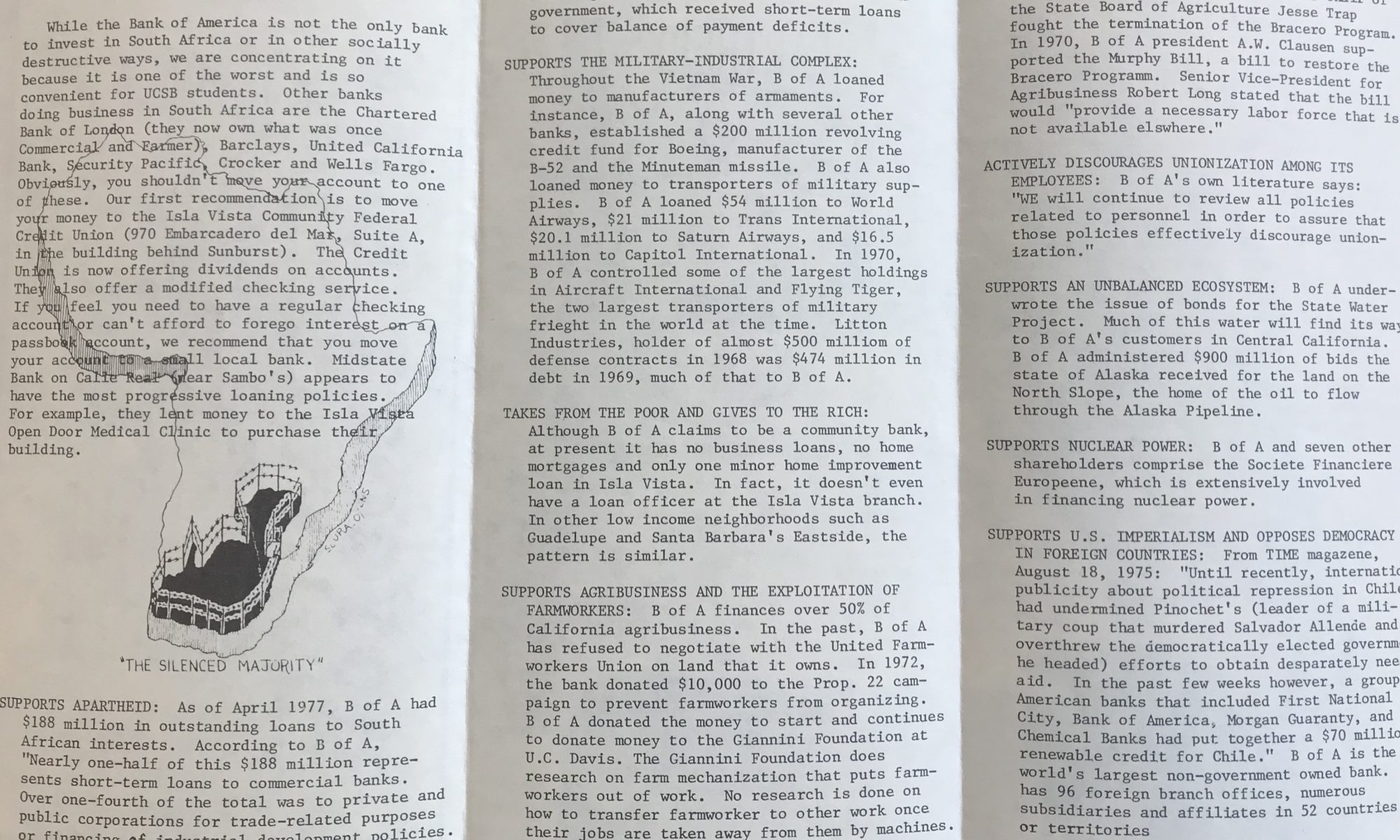 “With the money you deposit at the Bank of America, B of A:

Supports the racist system of apartheid:

As of April 1977, BofA had African interests. According to B of A, ‘Nearly one-half of this $188 million represents short-term loans to commercial banks.  Over one-fourth of the total was to private and public corporations for trade-related purposes or financing of industrial development policies.  The largest recipient of the balance was the government, which received short-term loans to cover balance of payment deficits.

Throughout the Vietnam War, B of A loaned money to manufacturers of armaments. For instance, B of A, along with several other banks, established a $200 million revolving credit fund for Boeing, manufacturer of the B-52 and the Minuteman missile.  B of A also loaned money to transporters of military supplies.  B of A loaned $54 million to World Airways, $21 million to Trans International, $20.1 million to Saturn Airways, and $16.5 million to Capitol International.  In 1970, B of A controlled some of the largest holdings in Aircraft International and Flying Tiger, the two largest transporters of military freight in the world at the time.  Litton Industries, holder of almost $500 millio[n] of defense contracts in 1968 was $474 million in debt in 1969, much of that to B of A.

Takes money from poor communities (such as Isla Vista) and invests it in richer communities:

Although B of A claims to be a community bank, at present it has no business loans, no home mortgages and only one minor home improvement loan in Isla Vista. In fact, it doesn’t even have a loan officer at the Isla Vista branch.  In other low income neighborhoods such as Guadalupe and Santa Barbara’s Eastside, the pattern is similar.

Supports giant agribusiness and the exploitation of farmworkers:

B of A finances over 50% of California agribusiness. In the past, B of A has refused to negotiate with the United Farmworkers Union on land that it owns.  In 1972, the bank donated $10,000 to the Prop. 22 campaign to prevent farmworkers from organizing.  B of A donated the money to start and continues to donate money to the Giannini Foundation at U.C. Davis.  The Giannini Foundation does research on farm mechanization that puts farm-workers out of work.  No research is done on how to transfer farmworker to other work once their jobs are taken away from them by machines.. In 1964, the president of B of A and Chair of the State Board of Agriculture Jesse Trap fought the termination of the Bracero Program.  In 1970, B of A president A.W. Clausen supported the Murphy Bill, a bill to restore the Bracero Program.  Senior Vie-President for Agribusiness Robert Long stated that the bill would ‘provide a necessary labor force that is not available elsewhere.’

Actively discourages unionization among its employees:

B of A’s own literature says: ‘WE will continue to review all policies related to personnel in order to assure that those policies effectively discourage unionization.’

B of A underwrote the issue of bonds for the State Water Project. Much of this water will find its way to B of A’s customers in Central California.  B of A administered $900 million of bids the state of Alaska received for the land on the North Slope, the home of the oil to flow through the Alaska Pipeline.

B of A and seven other shareholders comprise the Societe Financiere Europeene, which is extensively involved in financing nuclear power.

From TIME magaz[i]ne, August 18, 1975: ‘Until recently, international publicity about political repression in Chile had undermined Pinochet’s (leader of a military coup that murdered Salvador Allende and overthrew the democratically elected government he headed) efforts to obtain desperately needed aid. In the past few weeks however, a group of American banks that included First National City, Bank of America, Morgan Guaranty, and Chemical Banks had put together a $70 million renewable credit for Chile.’  B of A is the world’s largest non-government owned bank.  It has 96 foreign branch offices, numerous subsidiaries and affiliates in 52 countries or territories.

As of 1973, members of the Board of Directors of BankAmerica Corp. or the Bank of America National Trust and Savings Association also sat on the Board of Directors of Pacific Telephone and Telegraph (5), DiGiorgio Corp. (4), Broadway-Haly Stores (4), Union Oil (2), Getty Oil (2), Standard Oil of Cal. (2) Standard Research Institute (2), Southern Cal. Edison (2), Time-Mirror Inc. (2), Ford, Bank of Hawaii, Household Finance, Northrup, Chrysler and many others.

Uses you as an experiment in marketing techniques:

That’s right! The Isla Vista branch of B of A is an experimental branch to study marketing for college-aged people.  We hate to say it, but you are the guinea pig.”