“At 6:23 a.m. on April 11th, 1969, a homemade bomb exploded in the Faculty Club. Caretaker Dover O. Sharpe was examining the cardboard box in which the bomb was concealed when it detonated. The explosion knocked him back about 15 feet across the patio of the Club and fatally injured him. According to the official report of UCSB, Sharp suffered ‘burns of 70 percent of his body, compound fracture of a leg, mutilated hand, an injured eye, and multiple shrapnel wounds.’” 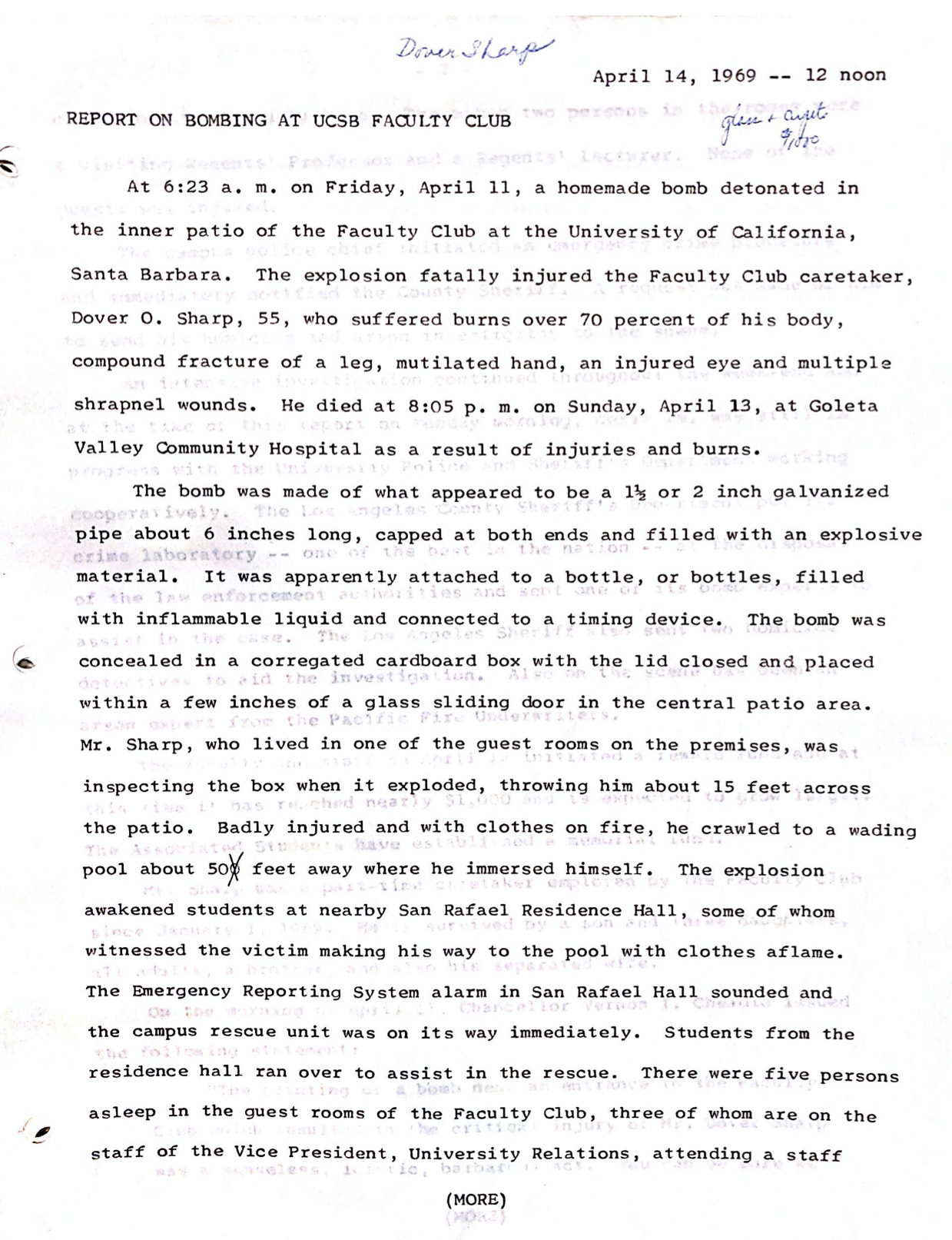 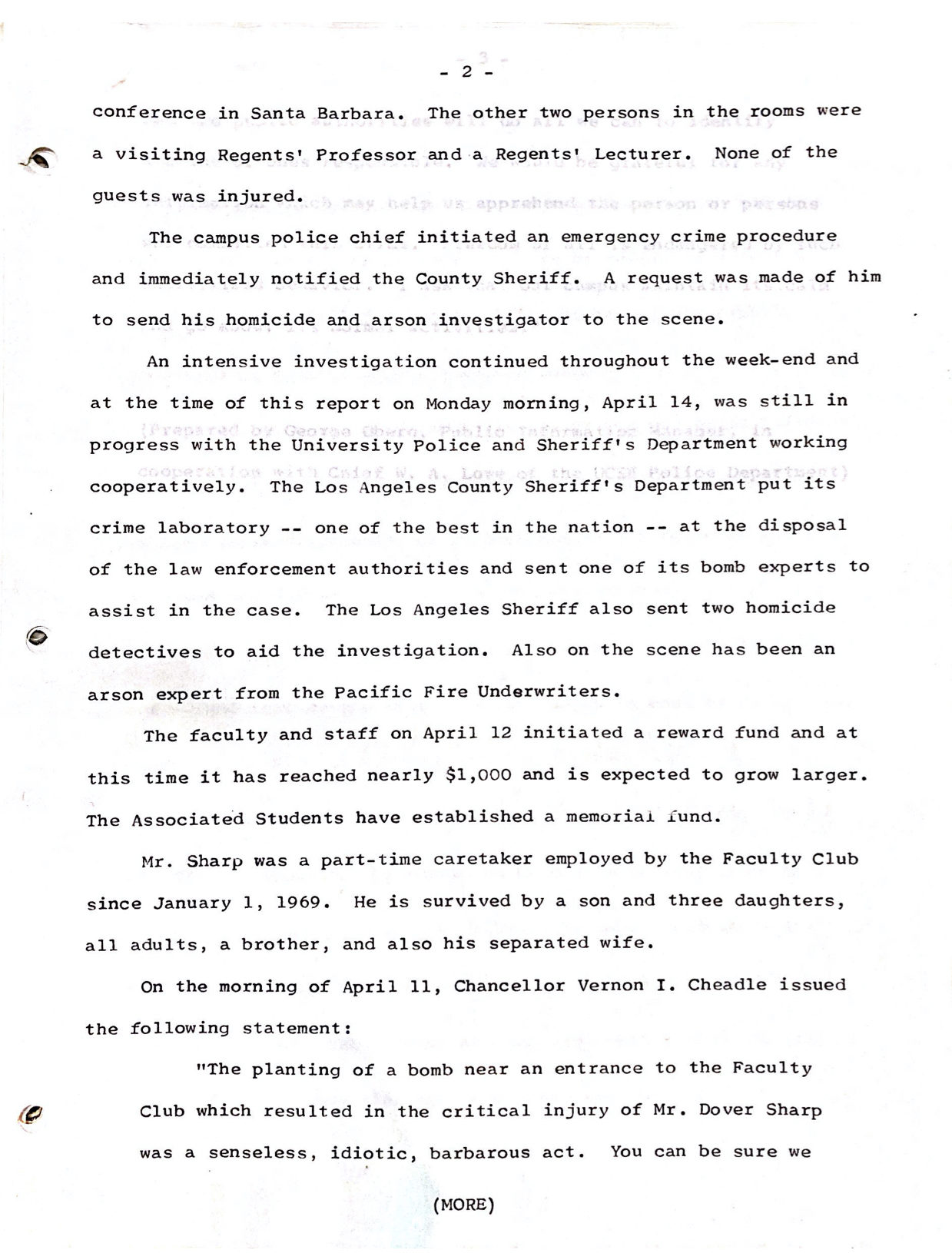 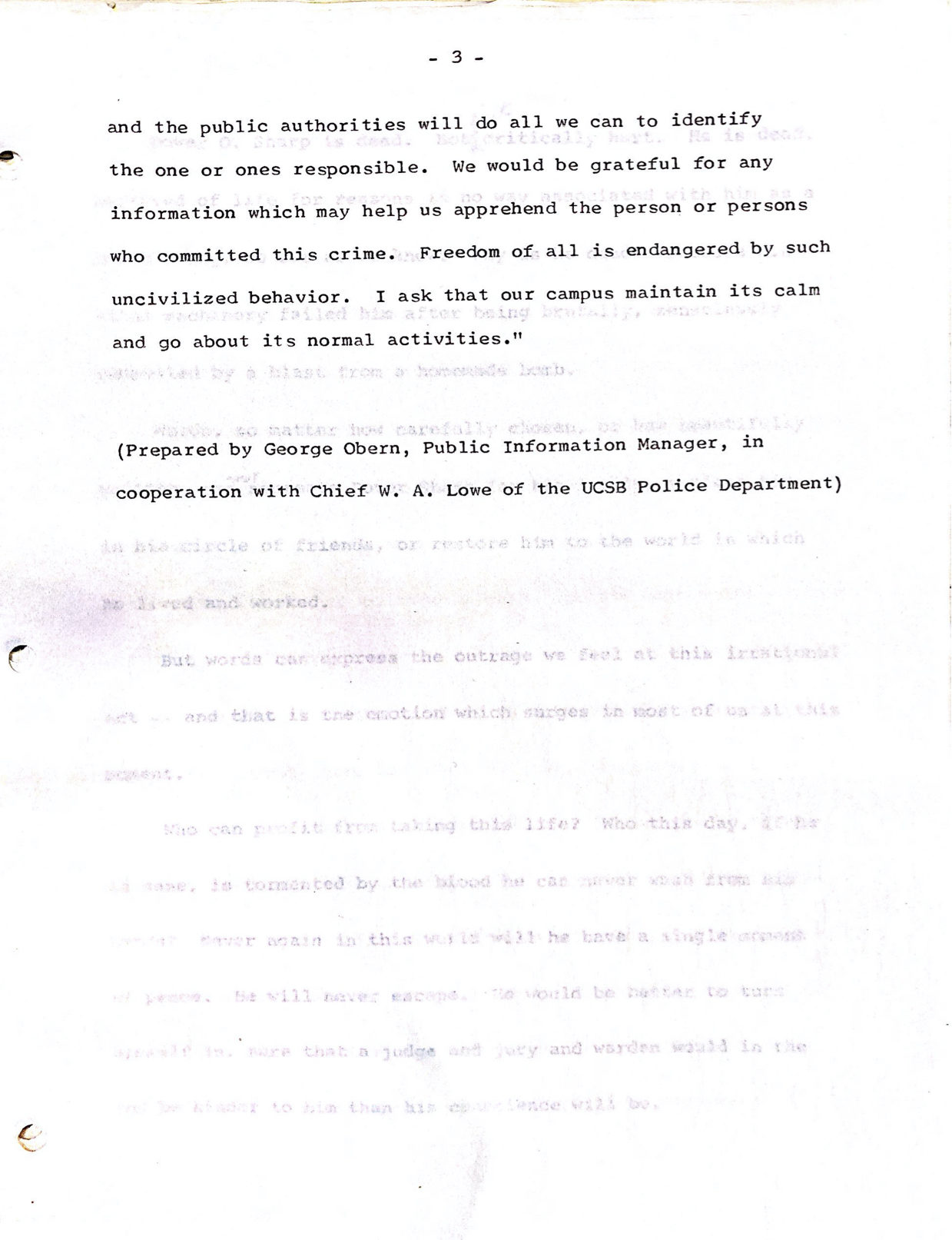 Dover O. Sharpe passed away 2 days later at Goleta Valley Community Hospital after having managed to crawl to a pool about 50 feet away and being rescued by students living in San Rafael Hall.  He was survived by, “three sisters, three brothers, one son, three daughters, and six grandchildren”, as reported in El Gaucho.

Equally striking was the fact that the bomb was fairly sophisticated.  In an El Gaucho article, Fire Chief Arthur T. McGarry stated that the bomb consisted of,  “a half gallon wine jug filled with a volatile liquid, such as gasoline, a timing device, a battery, and a piece of six inch pipe packed with an explosive compound.”  Apparently, the bomb was made to kill instead of making an alarm.

Although no one was eventually arrested, speculations on the bomber’s motive abounded.  When testifying before Congress, Captain Joel Honey of the Santa Barbara Sheriff’s Department conjectured that it had something to do with the Club’s exclusion of students: “there had been a radical element which had denounced the Faculty Club as a closed club that would not allow the admission of students without the express invitation of a faculty member.”  When reflecting on the event in 1991, Sociology professor, Harvey Molotch, believed that “there was logic behind the events that occurred in the 1960s and ’70s…stopping the Vietnam War and other issues of the day.”  For Molotch, the bombing was one instance.  Another hypothesis was furthered by Physics professor, Robert Schrieffer.  He was convinced that the bomb was intended to assassinate Professor Freeman Dyson, a visiting Princeton University physics professor residing in the Club at the time.  According to Schrieffer, Dyson’s study in nuclear weapons made him the target.

It is impossible to tell which theory is correct, but there is little doubt it was political action.  As Malcolm Gault-Williams, author of Don’t bank on Amerika, pointed out that the bombing “came at a time of rising student activism at UCSB.”  Indeed, it was within the life span of the New Free University (NFU). The NFU was established on February 17th by the United Front (UF), constituted by the Black Student Union (BSU), United Mexican-American Students (UMAS) and Students for a Democratic Society (SDS). They had peacefully occupied, or “liberated”, the UCen since then. They attempted to educate themselves on courses not accessible through the curriculum, ranging from Black Literature to Philosophical and Environmental Revolution.

An El Gaucho article on the NFU reads that, “[the] UCen is now more populated them it ever was; over 90 classes have now been scheduled.  Even Vice Chancellor Goodspeed is teaching one.”  This was reported on the April 11th issue, the same day of the bombing.

In a 2015 article, David Minier, who served as district attorney in Santa Barbara County at the time of the bombing, asserted that “[there] was no outrage,” after the tragic incident; however, it is, if anything, a false claim. “What the hell kind of campus do we have?” a following El Gaucho editorial questioned with apparent anger.  In a letter entitled, “Pandora’s Box Opens”, Alana Kathleen Brown, a Graduate English student, stated that, “I doubt that the bomb was intended to kill anybody, but whoever did it is now a murderer.”  “This is our school,” junior Bill James declared.  “Thus we are victims of the senseless bombing as well as Mr. Sharp.”  Not only did students condemn this tragedy in words, but also in action.  About 150 students led by student James Marino rallied on April 14th at the UCen in protest of the bombing.  Earl MacMillan of the BSU stated that the BSU “ deplores all acts of violence.”  Greg Knell, speaking for SDS, uttered that, “we should be condemning the violence of our society … we should be condemning all violence.”

In his 1991 reflection, sociology Professor Harvey Molotch remarked that “the death of Dover Sharp was one of the low moments of the anti-war movement in the 1960’s,” and a “disappointment to the majority of the left.”  Indeed, the left took a big hit because of this tragedy, although “[everyone] from the Young Americans for Freedom, the Associated Students, the Black Student Union and the Students for a Democratic Society voiced their opposition to it,” If we believe Geoffrey Wallace, who was himself a student at the time, those radical associations were much discredited among students.  Michael M. Engler, a Junior Political Science student apparently blamed the SDS for violence and declared that “I would like [the] SDS and its mickey-mouse crew of amateur revolutionaries and stormtroopers to tell the rest of the student body exactly what kinds of violence and terrorism it favors, and exactly which of us are not ‘innocent’ men.”  Another Political Science Junior Doug Pittman certainly felt the same and wrote satirically that “[specific] violence is wonderful to the SDS I take it, since only random’ violence is condemned. That certainly makes the rest of us feel safe and secure, now doesn’t it?”  As a result, the NFU, which was maintained by the left, lost its supporters. Two weeks after the bombing, NFU abandoned the UCen.  Their statement reads that “[our] support has fallen. We hope that through our dissolution, the students here at UCSB will realize that the problems we have attempted to correct require support.” Yet no support came back, nor did the NFU.  There were many reasons, and the bombing unfavoring activists was certainly one of them.

Nowadays, we are living in a world hardly insulated from violence. At the same time as I am researching this article, violence is spotted around the globe, so far as in Asia and South America, and so near as Santa Clarita, California. These instances keep reminding us that history matters and still haunts us, or, as Karl Marx famously framed, “weighs like a nightmare on the brains of the living”.  What’s the lesson then? The answer is that violence cannot further the pursuit of political demand, no matter how justifiable and legitimate; rather, it could do only harm to the cause since it inevitably alienates bystanders and even some supporters. We all want to make our world better, but violence is by no means the way to achieve it.