On November 17th, 2021, the lecturers of the University of California called for a state-wide two-day strike on all UC Campuses to protest unfair labor rights against lecturers who work for the UC system. Across all Universities of California, there are about 6,500 employed lecturers who teach twenty percent of classes, who claim they do not make fair pay for the number of hours and work put into their jobs. With the threat of the strike, lecturers were fighting for a thirty percent salary increase over five years, promises of job stability, clearer outlines of workloads, and annual costs of living adjustments. However, the strike did not end up taking place because the University of California decided to accept the terms of the UC-AFT lecturer union.

At UCSB, both tenured professors and lecturers were planning on canceling classes in support of the strike. Many lecturers and professors spoke about the strike to their students in class, encouraging them to support the strike and canceling class. On November 18th, an in-person strike at Stroke Tower was planned for students and faculty to attend. Outside Storke Tower, there was to be a presence of people all day long. There were also marches planned to take place with faculty and students in front of the library and across campus. A solidarity pledge was also sent around to students to sign and share to pledge support to lecturers and fight back against unfair labor practices. Attendance was expected to be high, as many students rallied in support of the lectures.

Below is a flier posted on campus created by UC-AFT: 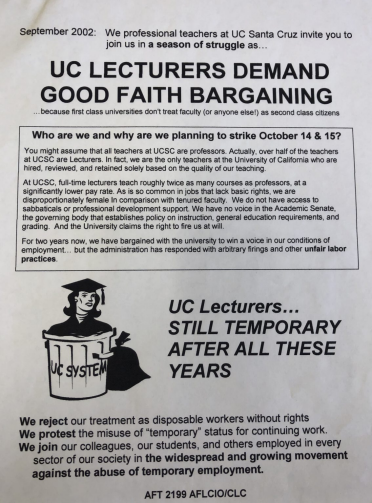 As bargaining between the University Council-American Federation of Teachers (UC-AFT) and the University of California went late into the night, many students and faculty expected the strike to continue as planned for the next two days. To everyone’s surprise, a tentative resolution was reached by both sides in the early hours of the morning.

The resolution included more job stability and protection for lecturers to make advancements in their careers, raise the salary floor, add annual cost of living adjustments (COLA) for each year of the contract, improve how workload standards are defined, and offer four weeks of fully paid family leave, among other things.

As most classes were already canceled and most UCSB students were going to join the strike on both days that it was planned, a celebration in front of Stroke Tower took place instead. It was filled with happy people across the board, as most lecturers were thrilled about the new contract and the future of their careers, and students were happy for their lecturers who have provided them a wealth of knowledge during their years here at UCSB.

In an email sent to his students after the strike was canceled, lecturer Chase Hobbs-Morgan stated “Sometimes simply the promise of striking is enough to pressure employers to negotiate. Importantly, this works better when the workers are members of a union, and it works even better when members of the community such as you all as students step in to support.” Hobbs-Morgan was also a leader in planning the strike and coordinated between students and faculty, which took over two years of organizing, students writing letters in support, members of the community speaking up, journalists writing articles, and many other avenues of support for the UC to extend the contract. Lecturers were very thankful to students of UCSB for speaking out on the behalf of lecturers and pleading support to the strike.