During the summer of 1987, the CIA arranged the appointment of senior officer George A. Chritton Jr. to the UCSB Political Science Department faculty as a lecturer.  This was part of their new Officer-in-Residence Program, which launched in 1985 as an attempt to, “nurtur[e] relations between intelligence and academia” (Hedley 2008).  For the 87-88 academic year, the agency managed to place senior officers at six U.S. universities, all with faculty status.

Agent Chritton’s appointment had been approved by Professor Dean Mann who, until the start of Fall ‘87, had been the Political Science Department chair. In a letter to Mann dated June 3rd, 1987 from Stanley Moskowitz, the chair of the CIA Training Selection Board at the time, Moskowitz nominated Chritton for the position.  He laid out the agency’s goals for the program and explained that the Agency would fund Chritton’s salary. He stated  the program, “will demonstrate the quality of CIA people…strengthen [the agency’s] professional ties to a fertile and indispensable source of ideas and technical expertise…[and] enhance CIA’s recruiting efforts.”

To the surprise of both the CIA and UCSB administration, Chritton’s appointment was quickly met with controversy.  UCSB was the first campus where the Officer-In-Residence proved controversial according to Bill Devine, the CIA Public Affairs Officer at the time (Elzer 1987).

It was not until the first Academic Senate meeting of the school year when Chritton’s appointment was made public.  Senate Chair A.E. Keir Nash expressed his concern over the appointment and the irregular hiring process leading the Political Science department to vote on the issue (Moss 1987). On the 28th of October, they voted to demote Chritton’s position to Visiting Fellow, which would prevent him from teaching; however, this vote was only considered advisory to the Cheadle Hall administrators, who ultimately held the hiring authority (Elzer 1987).

The same night as the faculty vote, a bill authored by Dan Zumwinkle passed 14 to 1 by AS Legislative Council.  It called for “faculty, administration, and students to revoke the appointment of CIA agent George A. Chritton Jr. to the UCSB faculty and to take steps to ensure that this incredible situation does not happen again” (Zumwinkle 1987). The bill was presented to the then Chancellor, Barbara Uehling, on the 29th.  It expressed concerns over the implications of the university being affiliated with “such a nefarious organization” (Zumwinkle 1987).  Their main grievances were the morally questionable actions of the CIA, their recruitment on campus, the irregular hiring process, and concerns over the integrity of academic freedom. The bill deadline to dismiss Chritton from any position he may hold at UCSB was set to be November 4th.

On the day following the deadline, AS Student Lobby and Leg Council held a rally urging Chancellor Uehling to dismiss Chritton. The rally was held at noon in front of Cheadle Hall and attracted an estimated 600 people. Rally organizers had arranged for “John Stockwell, the highest-ranking former CIA official to speak out publicly against the agency,” though he was unable to make it due to a flight cancellation (Collins & Elzer 1987).  Following the rally, 150 students occupied the Chancellor’s empty office, stressing that a CIA affiliated faculty member would corrupt the ideals of the university and the school would be “pledged to disinformation”(Collins & Elzer 1987). “If we allow this person to retain an official position within the University of California faculty, then we’re setting a precedent that says it’s okay for members of covert organizations to teach in universities.  Anyone who is interested in preserving the ideals of this university has to oppose this all the way,” explained Todd Gooch, one of the rally organizers (Collins & Elzer 1987). Uehling returned later that day escorted by university police and let  protestors know that Chritton’s appointment was still under review. The students remained inside until Cheadle Hall closed for regular business, at which  point, police began arresting students for trespassing. 38 students were arrested and 35 of those were booked into Santa Barbara County Jail for a day. 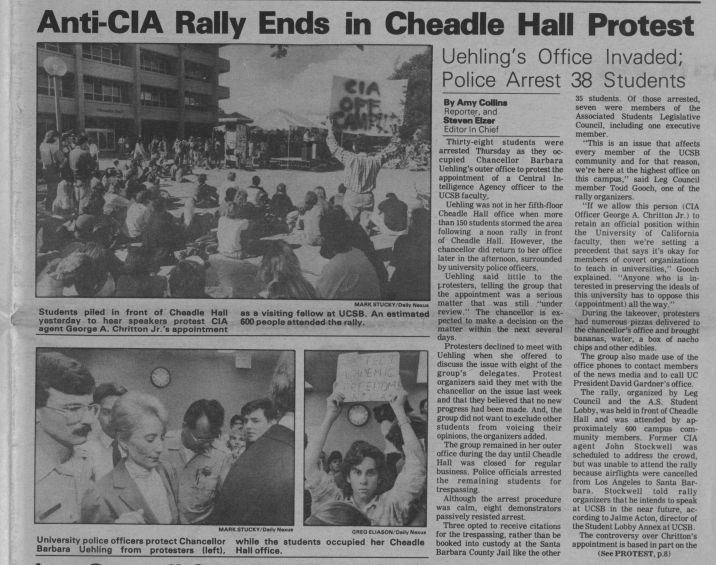 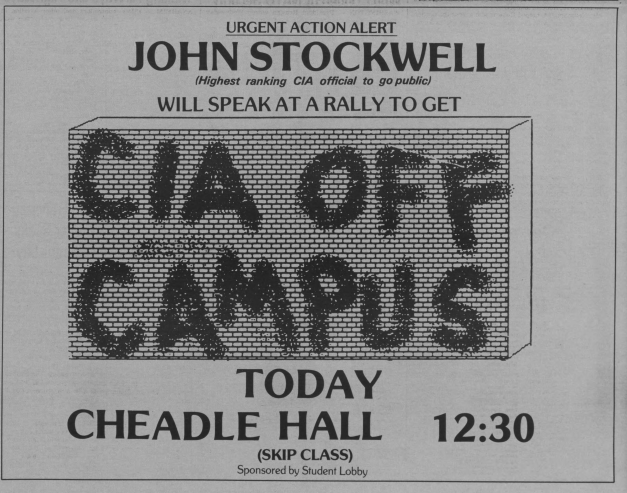 Though the anti-CIA sentiment was strongly felt on campus, many wrote to the Nexus voicing their support of Chritton.  The overwhelming defense employed free speech. “I am not defending the CIA as an organization, however, I am defending the rights of individuals…do you not think that you are being just a little selfish by not letting somebody express their view?”, read one Letter to the Editor by Lawrence Leak.  Another letter by Gregory Apt expressed a similar concern over freedom of speech.  “I can only hope that the Academic Senate gets off their fascist, censoring butts and… allow this person to speak here.”

Two days after Leg Council’s deadline, the day following the rally, the Chancellor announced her decision to keep Chritton as a Visiting Fellow for one year with the possibility of a year extension.  Chritton addressed the public for the first time saying, “The principle of the First Amendment has been upheld. My hope now would be that the volume of the rhetoric is lowered and the quality is raised,” (Elzer 1987).  The Chancellor also cited free speech to defend her decision, stressing that what was of utmost importance was “freedom of speech and the capacity of a university to provide for the expression of a broad range of ideas” (Elzer 1987).  The opposition viewed this decision as “blatant disrespect of student and faculty opinion,” Rob Christiansen told the Nexus (Elzer 1987).

The opposition insisted that Chritton’s appointment was more than just a symbolic gesture to preserve free speech and would legitimize the actions of the agency, as said in Elijah Lovejoy’s Letter to the Editor:

To support the CIA is to support destabilization tactics and murder, just so that big American corporations can keep you supplied with your conformist bourgeois life, I refuse to admit that the CIA has any legitimacy whatsoever and am appalled at the thought of having those spooks on Campus.

Others ridiculed the Chancellor for employing the free speech defense, like Brian Haley in the Nexus:

I know that I speak for all members of this campus community who have yet risen through the ranks of either the university or the CIA to the lofty positions of faculty when I thank the good chancellor for clarifying that freedom of speech is a right which I have not yet earned.

The opposition maintained that the appointment had nothing to do with free speech but everything to do with academic freedom; they insisted that an “agency of disinformation has no place in an institution dedicated to the truth” (Liles 1987).  On November 16th, approximately 75 students delivered a coffin to the office of the Chancellor  as a representation of the death of academic freedom.  “We’re here to present the first of many casualties to result from the appointment of senior CIA Officer George A. Chritton to the UCSB political science department,” Jamie Acton told the Nexus during the protest (Sullivan 1987). 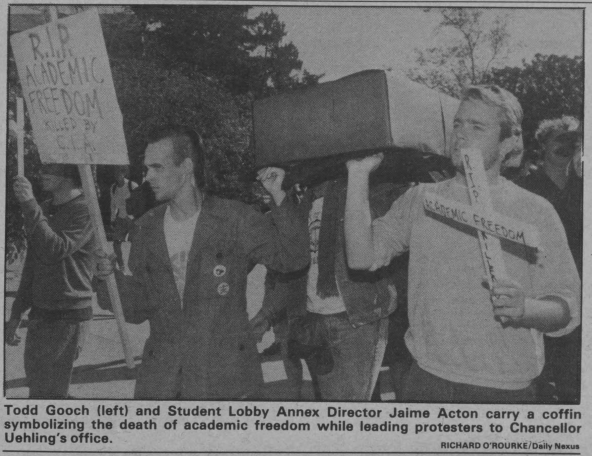 Some even criticized the academic freedom defense for looking past the CIA’s moral transgressions. Sandy Liles wrote in the Nexus:

What I find repellent is the element of self-righteous indignation: bad enough that the CIA should carry out torture, assassinations, and destabilization; God forbid they should invade our guiltless bastion of free thought.

In response to Professor Robinson’s question, “How can a university, a place of free inquiry, coexist with a government or any other institution which operates under secrecy?”, the opposition  held a five-hour “Teach-in” exploring the relationship between universities and the U.S. government. “It was pointed out to us that if we just focused on the CIA…we’re missing a much broader picture, a much larger vision of the federal government in general and their involvement in the university,” Jaime Acton, Student Lobby Annex Director, told the Nexus (Sullivan 1988).  One pamphlet for the event read, “UCSB is abundant with examples of academic orientation toward the interests of the military-industrial complex,” (Moss 1988).  The Teach-in was organized by the Student Lobby for the Academic Freedom Defense Project, which raised money for the legal defense for the students arrested back in November, though the proceedings eventually ended in a mistrial.  The event was held on Jan 28th, 1988, hosting several speakers including UCSB professors and ex-CIA agent Vern Lyon, who spoke about his involvement with spying on university campuses. 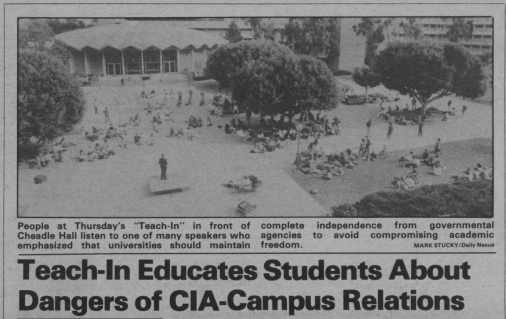 On May 3rd, 1988, the Political Science faculty voted not to reappoint Chritton due to lack of qualifications (Whalen 1988).  Patrick Whalen’s Daily Nexus article announcing the decision read:

The decision ends nearly six months of unrest among UCSB students, faculty and staff who were outraged when they learned last October that a CIA agent was teaching on campus. Chritton, 55, will leave the university by June 30, when his current appointment is scheduled to end. 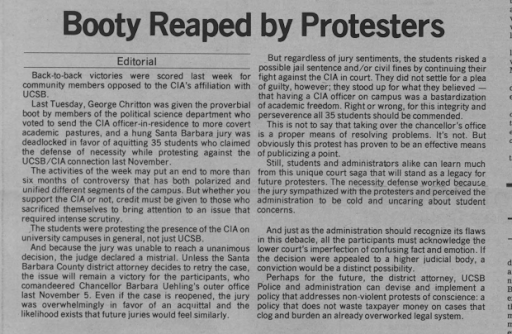